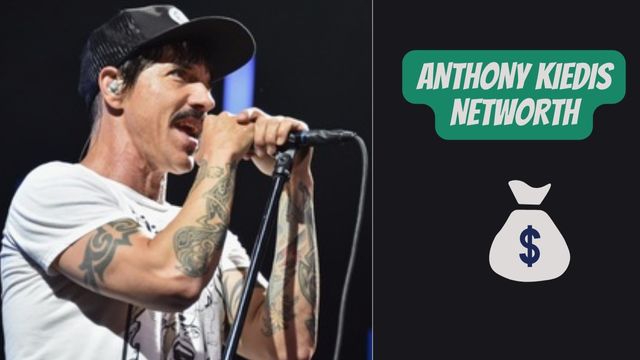 Anthony Kiedis is a wealthy American rock musician with a net worth of $155 million. Kiedis is best known as the lead singer of the Red Hot Chili Peppers. The band’s breakthrough came in 1991 with the release of their alternative rock album “BloodSugarSexMagik,” which sold more than 4 million copies. In 2012, Kiedis and his bandmates were inducted into the Rock and Roll Hall of Fame.

As the lead singer of the Red Hot Chili Peppers, Kiedis is one of the most well-known figures in alternative rock. Kiedis’ lyrical style has evolved over the course of his career; early recordings dealt with sex and life in Los Angeles, whereas more recent songs deal with more reflective themes like love, addiction, and loss. He struggled with addiction until 2000 and claims to be sober since then.

Anthony Kiedis’ estimated net worth is $155 million as of 2022,  According to Celebrity Networth. the founder of the Red Hot Chili Peppers is admired for his distinctive rap style and for writing the band’s biggest hits.

Through live events and brand endorsements, he earns nearly $25 million annually. He owns a number of mansions throughout the United States. His time with the band has contributed significantly to the majority of his bank account.

Eleven studio albums, eight video albums, five extended plays, 47 music videos, and 44 singles have been released by the band to date. The band has sold more than 80 million albums globally. His contributions to the Red Hot Chili Peppers have been certified as gold and platinum.

Kiedis has appeared in films such as Point Break and Less Than Zero. However, he has made the majority of his money with the band. In addition to the money he has made from music, Kiedis has also made a lot of money from other things.

How Much Money Does The Band Make?

The Red Hot Chili Peppers (RHCP) will be the 11th highest-paid entertainers in 2022, according to Forbes. RHCP has sold over 80 million albums, received six Grammy nominations, and was inducted into the Rock and Roll Hall of Fame in 2012.

The band sold its music collection to UK investment firm Hipgnosis for US$140 million last year. Variety reports that its songs, which are mostly written by its members, bring in $5 million to $6 million per year.

The RHCP has made a fortune from album sales, as shown in the estimate below:

What Does Anthony Keidis Do With His Money?

Anthony Kiedis was born in Grand Rapids, Michigan, on November 1, 1962, to John Michael Kiedis and Margaret Noble. Sonny Bono of Sonny and Cher was his godfather. When Kiedis was three years old, his parents divorced.

His father made most of his money from drug dealing, but he also dabbled in acting. Kiedis was exposed to the Los Angeles club scene while living with his father, where he saw rock acts such as the Eagles, Neil Young, Deep Purple, and Rod Stewart.

He eventually persuaded his mother to let him live in California with his father. In his teen years, Kiedis moved in with his father and soon began experimenting with drugs. He started with marijuana and worked his way up to heroin, cocaine, and Quaaludes.

By the mid-1970s, his father, John Kiedis, had decided to try his hand at acting, enrolling in classes and adopting the stage name “Blackie Dammet.” Kiedis began acting as “Cole Dammet” and landed a few commercials and small parts.

Kiedis began his career as a child actor but quickly switched to music. While still in high school, Kiedis formed the musical group Red Hot Chili Peppers with bassist Michael “Flea” Balzary and other bandmates in the early 1980s.

Kiedis and his bandmates have been nominated for 12 Grammy Awards, with three of them winning. The band holds the record for the most consecutive weeks at number one on the Billboard Alternative Songs chart, as well as 13 number-one singles.

Anthony and the band have had enormous success since then, releasing a string of hit albums and being inducted into the Rock and Roll Hall of Fame in their first year of eligibility in 2012. Anthony is still touring with the Red Hot Chili Peppers around the world.

The RHCP was founded in 1983 by Anthony Kiedis, Michael Balzary (Flea), Hillel Slovak, and Jack Irons. Because Slovak died in 1988 and Irons left at the same time, Slovak and Irons were only with the band for a short time.

Later on, John Frusciante and Chad Smith joined, bringing the total to four. Frusciante left the band twice, in 1992 and 2009, and was replaced by Dave Navarro and Josh Klinghoffer, both of whom contributed to the band’s success.

Kiedis has had romantic relationships with celebrities ranging from Demi Moore to Hayden Panettiere, but he has never been married. In 2007, he had one child, Everly Bear. Kiedis dated Sinéad O’Connor briefly in 1990, Yohanna Logan on and off from 1998 to 2003, and Australian model Helena Vestergaard for two years until late 2014.

From 2004 to 2008, Kiedis was married to Heather Christie, and they have a son named Everly Bear. In March of 2018, Kiedis and Christie were engaged in a custody battle over Everly. He was also briefly involved with the Spice Girls singer Melanie “Sporty Spice” Chisholm. Kiedis disclosed information about his past relationships, claiming he once had more than 100 sexual partners.

Kiedis ran into legal trouble following a post-concert incident in 1989. According to the New York Times, he was charged with sexual battery and indecent exposure after a concert at George Mason University in Virginia in April. He was later punished.

Kiedis was involved in a motorcycle accident in Los Angeles in 1997. When he was riding his motorcycle, he was hit by a car, breaking his wrist and forearm. Kiedis sued the driver for damages the following year.

2022-10-24
Previous Post: Chainsaw Man Chapter 108 Release Date and Time: Where to Read Online?
Next Post: Andrew Tate Net Worth: How Much Money Does Andrew Tate Have?