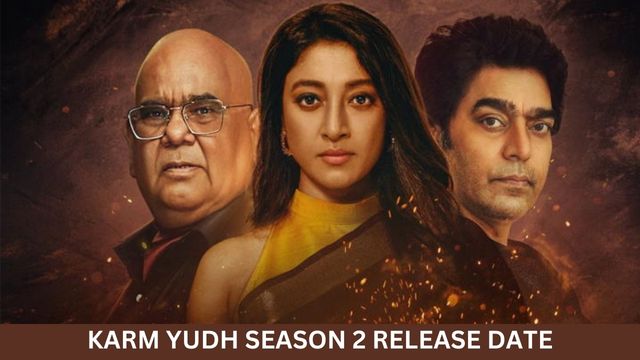 Karm Yudh is an 8-episode dynasty drama series that lasts between 30 and 40 minutes. Ravi Adhikari directed the show, which premiered on September 30th, 2022. The plot of the show centers primarily around an accident. The aforementioned accident sparks a family feud over ownership of Bhisham Roy’s industries.

On IMDb, the series received an 8.5/10 rating. The Times of India gave it a 2.5/5 rating, while Leisurebyte gave it a 2/5 rating. Regardless of the different grades provided by critics, the series was well-received by the audience, and some are even looking forward to the next season.

There has been no official word or clue about whether the series will be renewed or canceled, but the odds of another season look slim. The show was underestimated and turned out to be a mediocre series that left little of an impression.

The plot stuck to the same old formula. In a wealthy family, an accident results in the distribution or change of ownership of property The entire family is at odds with one another due to greed or personal desires.

The tale turned out to be just another normal family drama, thus there was no compelling reason to keep the series going for another season.

And if they were to extend the season for any reason, it would most likely be released in 2024 because it is already the end of 2022 and it would take at least a year for them to come up with a renewal of the series.

Karm Yudh is the story of the Roy family, a Bengali family. The show follows the typical notion of family dynasty dramas in which the head of the Roy group of enterprises is to be replaced due to a fire that occurred in one of their industries.

The Roy family has been at odds with the concept of authority. A war to determine who would receive ownership of the said organization. It features a lot of plot, drama, crime, and pace.

If you are not bored with the repetitive aspect of a family fighting family over property argument, the show is worth watching. The cast and pacing of the story are also notable.

If there were a second season of Karm Yudh, it would have the same cast as the first, as it would be a continuation of the plot previously shown.

Satish Kaushik portrays the current owner of the Roy Group, Bhisham Roy. Ashutosh Rana portrays the vengeful Guru Shastri in the series. Paoli Dam portrays Indrani Roy, a candidate for leadership of the group, in this production.

Chandan Roy Sanyal portrays Adesh Baghichi, while Pranay Pachauri portrays Samar Shastri. The aforementioned five characters are the ones who drive the plot.

If you haven’t seen the series yet and are curious about what it’s like, I recommend watching the trailer for the same series online on either Disney+ Hotstar or YouTube.

Where Can I Find Karma Yudh Season 2 Online?