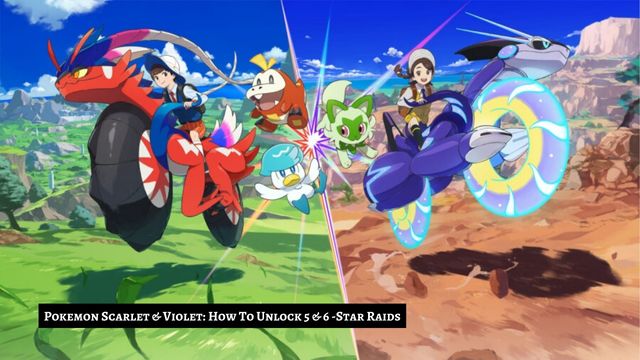 Players of Pokemon Scarlet and Violet have to work hard to not only unlock 5-Star Tera Raids but also the best prices from 6-Star variants.

Game Freak has added a lot of new things to the Pokemon series, in addition to keeping the core gameplay loops of capturing and fighting different species. With Pokemon Scarlet and Violet, players can explore a large, open world at their own pace, without having to follow set routes to gyms.

In reality, Paldea, which is based in the Mediterranean, has many missions, such as fighting Team Star, finding Titan Pokemon, and fighting gyms in any order.

Other parts of the game were also changed, like bringing back Raid Battles from older games like Pokemon Sword and Shield.

In Pokemon Scarlet and Violet, the Tera Raids are now timed, giving players a limited amount of time to beat and capture the Terastal Pokemon. Players no longer have to wait for their turn, and they can choose their own actions and how fast they attack.

As was expected, Pokemon Scarlet and Violet use a star system to show how hard a battle will be. Everyone will face a lot of 1- and 2-star raids, but it will take a while to unlock the harder 4- and 5-star raids, which offer some of the best rewards in the game. Here’s how to get into the raids that have the hardest challenges.

People who want hard tests will have to wait for a while. To take part in 5-Star Tera Raids, all you have to do is finish the main storyline of Pokemon Scarlet and Violet.

After seeing the game’s credits, the player will get a phone call from Jacq. He or she will tell the player that there’s more to do, including 5-Star raids happening all over Paldea.

Even if your team isn’t well-suited for these raids, the risk is well worth the reward. Not only do these raids have the last forms of Pokemon like Annihilape, Gengar, and Dragonite, but completing them also gives players strong items like Rare Candy, Exp Candy, Tera Shards, and Bottle Caps, among others.

Most Pokemon players will be happy with how hard 5-Star Raids are, but those who want an even bigger challenge can unlock 6-Star versions.

Trainers of Scarlet and Violet will have the hardest time with these level 90 Pokemon, but if they can beat them, they will get some of the best items, like herba mystica and the highly sought-after Golden Bottle Cap.

Players have to put in some work to get to 6-Star Raids. Players must compete in eight gym rematches between levels 65 and 73 after becoming Champion of the Paldea area.
After that, the participants will be asked to come back to the university and compete in the Academy Ace Tournament, which consists of four random matches against high-level opponents.

Lastly, players will have to host 5-Star versions of Tera Raids for Pokemon Scarlet and Violet. Note that going to them doesn’t count. Once the player has hosted the required number of raids, Jacq will contact them again to let them know that 6-Star Raids have happened.

Scarlet and Violet Pokemon can now only be played on the Nintendo Switch.