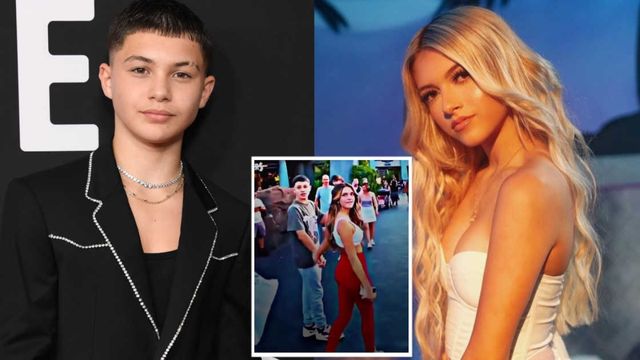 Something appears to be happening between Javon Walton and Coco Quinn. A video showing the two of them walking hand in hand appeared on the video-sharing platform TikTok not long ago.

And now, fans believe that these two are dating. Continue reading to learn more about Javon Walton and Coco Quinn’s recent outing.

A fan recently spotted the Euphoria star and the Dance Moms alum holding hands at a Jurassic World theme park. The video of the two of them became viral on TikTok in the blink of an eye.

The video shows Javon Walton and Coco Quinn walking hand in hand, having a fantastic time, and not paying attention to people around them.

Javon and Coco were dressed down for their most recent outing. Javon wore a grey patterned t-shirt and blue denim. Quinn, on the other hand, wore a white crop top with red tights.

If you watch attentively at their reaction in the video, it appears like they were not expecting anyone to notice, but they were also not astonished. As of now, neither of them has issued an official statement about the TikTok video.

Read More: Who is Isabel Lucas Dating? All About Her Boyfriend & Exes

Who exactly is Coco Quinn?

For those who are familiar, Coco Quinn is a 14-year-old dancer most recognized for her debut on Dance Moms. She is Jeannie Quinn’s daughter. She is the younger sister of Kaylee and Rihanna Quinn.

Coco is a professional singer, dancer, and actress. She has amassed a sizable social media following in recent years. She currently has 2.2 million Instagram followers. Quinn’s Instagram feed is full of lovely photos of herself.

Do you think Coco and Javon should be together? Please let us know in the comments section. Don’t forget to check back with us for the most recent news from the entertainment industry.

What Did Fans Think of Javon and Coco’s Video?

“If yall are genuinely Javon ‘fans,’ be happy for him,” one user remarked. You’re attacking both him and Coco as if you have power over them or something. He mentioned he doesn’t date blondes or 08s, yet you’re attacking him for doing the opposite? Be glad for them if they’re happy together.”

“Look,” another person tweeted. I disagree with the Javon and Coco situation. Personally, I dislike Coco and Javon, but it’s not his fault she threatens a fan to stop editing Javon. LIKE WTF THEIR FANS CAN EDIT “WHOEVER” THEY WANT, IT’S NOT YOUR BUSINESS TO TELL THEM ANYTHING ELSE!!! ”

Then came a person who wrote, “the individuals who feel jealous of the photographs that came out of Javon and Coco???”

“But Kylee there’s this guy he made a live coco and Javon were holding hands and they were heading to Jurassic Park together I’m not a hater but there’s proof I guess,” one person added.

These are some of the fans’ reactions to Javon Walton and Coco Quinn’s TikTok video.

Why Are Coco Quinn and Javon Walton So Important to Fans?

The following are some of the reasons why Coco and Javon are so important in the thoughts of their fans: Coco and Javon were apparently sighted at the Jurassic World theme park by one of their admirers.

In the video that has gone viral on TikTok, the two are seen holding hands and wandering around oblivious to their surroundings.

They were attired in informal attire, which was appropriate considering the operating environment. CoCo was observed sporting red leggings and a white cropped T-shirt, while Javon wore a grey-patterned T-shirt and blue denim.

Both of their clothes were captured on camera. They did not appear astonished, but their behavior in the video indicates that they did not expect anyone to notice them.

2022-11-04
Previous Post: Who is Isabel Lucas Dating? All About Her Boyfriend & Exes
Next Post: Ron Suno Net Worth: How Much Does the Famous Rapper Earn?